For me, THE FIFTH ELEMENT is the other version of PULP FICTION, but this time, its set in SPACE.  Im not going to explain further the story element here, because its really nothing special, and too corny and cheesy, but somehow that silly story is on the same journey with the colourful, rich, and very European Essence that Luc Besson bring to this movie.

Bruce Willis is playing his type of character. The one sided heroes, with a lot of ridiculous one-liner that seems popping out of nowhere, while Mila Jovovich is very fun to watch. Her line of clothing/costume in this movie is very cool, and funky, especially that band aid costume.

A Treat to My Eyes!

In Fact, other than stupid hair style of Gary Oldman character, everything is very glam, avant garde-kinda, futuristic style. Imagine if Ziggy Stardust or 1970’s Elton John style is used by everyone around you. Jean Paul Gaultier did the costume design, a big kudos for him. Aside Mila and Willis, Ian holm put his rarely comedy performance in this movie. And that Chris Tucker, my god his mouth is annoying. His character is the one who make this movie a lot more cherish than it was supposed to be. Its not a bad thing, but i think his character can be toned down a little bit. But the main star, and the scene stealer is none other than the chameleon Gary Oldman. His performance in this flick is so weird, and elegant. His third best after Count Dracula in 1991, and a junkie maniac in Leon(which isanother Besson flick). His character is like having his own story. There’s not even one scene between him and Bruce Willis.

Fifth element is fun. The Multiple plot is very neat. Its accidentally becaming the light tribute to the multiple cross path plot from Pulp Fiction, but it wasnt trying pretend to complicated, and the result is amazing. The Detail is awesome too. I can see that Luc Besson and his team put a lot of effort to design the world 300 years from now. The low sea level land, the floating-car, the technology, or even the music is so cyberpunk in a very vibrant and believeable set. I Love it. The first time I Watched it, i didnt find much to like about this movie, I thought it was just another MEH science fiction. But it was in the Year 2000. And now, 10 years after, the movie seems more delicate and connect to the future. This movie crawl his way into my 20 favourite science fiction ever. 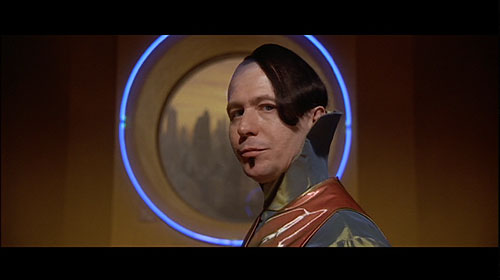 The Best luc Besson movie ever! Move away Leon.

PS : Halo Saga From Microsoft is ripping of their one of their GUN DESIGN from this movie!